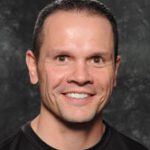 A native of South Dakota, John graduated from South Dakota State University. While attending SDSU, John played on the university’s hockey team. After graduating from SDSU, John worked for a large healthcare provider in South Dakota, initially in the cardiac rehabilitation department and later the sports medicine department. In both settings, his primary focus was helping the patients/athletes achieve effective changes in performance through the development of specific exercise prescriptions and training regimens. During this time, John became a Master Fitness Trainer with the Army National Guard where it was his responsibility to prepare 120 soldiers for the military’s physical fitness test.

In 1994, sports performance and acceleration training was introduced to John’s sports medicine department and he took the lead role in training local and area athletes in their sports performance/athletic enhancement programs. With over 20 years of sports performance training John has become one of the most experienced experts in the country. Since 1994, John has trained athletes from youth to professional. His list of professional athletes includes current and former players in the NFL, NBA, NHL, MLS, MLB and CFL. He was the strength coach for the NAHL Texas Tornado for 6 years and NBA D-League Texas Legends for 2 years. Along with his background and experience, John brings a strong work ethic and passion for helping athletes become better. John has been instrumental in enhancing training programs and building a reputation as a leader for performance training.